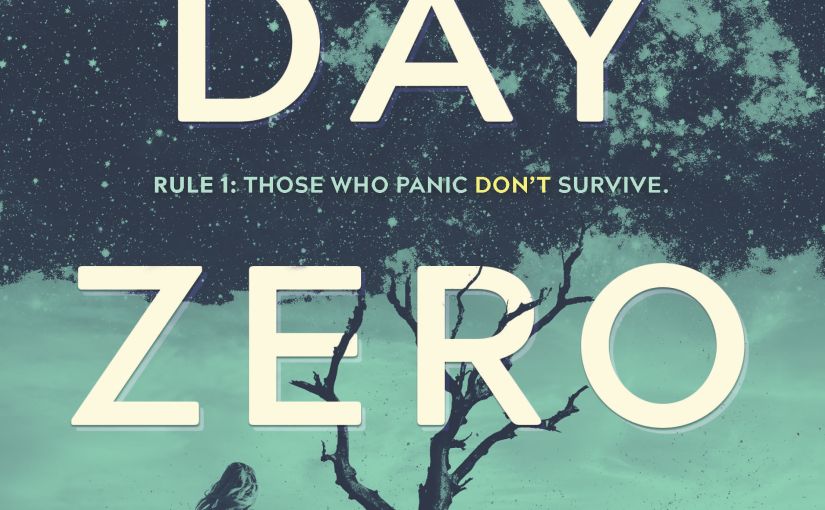 Have you ever wondered what it would be like to have a doomsday prepper as a dad? How about a technological genius? Well in Kelly DeVos’ book Day Zero we get to find out exactly what it would be like. When society begins collapsing around Jinx and her family she is left to save herself and her siblings using the knowledge instilled in her by her father.

Jinx is an introverted gamer with a serious knack for technology. Her father, Dr. Doomsday, is a prepper/technology extraordinaire, her mother a teacher, and her 8 year old brother named Charles who is a serious green thumb. We come into Jinx’s life in a time of massive change. Her mother has left her father for a man named Jay who works as a security guard at a massive bank owned by the new president. Jay has a daughter in high school, like Jinx, named MacKenna and a son in college named Toby. Their world has recently been rocked by an upset election taken by ‘The Opposition’, a seemingly shady political party opposing the people’s choice, ‘The Spark’. Well when the freshly inaugurated president Ammon Carver’s banks are blown up in a terrorist attack ‘The Opposition’ is quick to blame ‘The Spark’. In the midst of this MacKenna’s dad Jay is being framed for executing the terrorist attack. As the country descends into chaos and the two party system collapses, Jinx’s mom orders her to find her father and help them prove Jay’s innocence.

I have a lot of opinions about this book, some good and some bad. I feel like the politics in this book are very heavy handed and sometimes it ripped me out of the adventurous nature of this story. It would be borderline boring when MacKenna would argue politics with everyone and anyone. This book is definitely a commentary on the current political climate and doesn’t try and mask it in any way. Every turn we take ‘The Opposition’ is there to glare at us and the authors political stances are quite clear. She writes this early on in the book while Jinx is in class,

“I scroll to page 187 and stare at a picture of a nearly abandoned suburban neighborhood below a headline that reads “The Dangers of a Two-Party Political System.”

While I enjoy an interesting or unique political message I found this to be very heavy and made me feel anxious. I understand that many people believe that this could be the future of the U.S.A but to me it just caused anxiety and made me want to put the book down. I want to reiterate that I don’t hate a political stance in literature because some of the greatest works in history have underlying political messages, but this felt like it was being force fed down my throat. It’s already a discussion we are having, this is not the spark that will cause a forest fire of discussion.

One aspect of the ‘Hidden Message’ in this book that I do enjoy is the difference in generations. Like the modern world we see a distinct difference between who we could envision as the Baby Boomers and who we could view as the Millennials. One of the antagonists, an old motel owner, feels like a clear representation of the Boomers. He says to the kids,

Don’t you talk about things you don’t understand. You. You. Kids like you in your copper houses. Sitting in coffee shops drinking ten-dollar, almond-milk-caramel-mocha-whatevers. Talkin’ about whether monkeys have rights and how we all need self-driving cars. And we’re out here…

Does this not sound exactly like a Facebook argument between a Baby Boomer and a Millennial? I really liked that subtle detail. There is such a massive divide in this book, between political parties, families, and generations. I felt like DeVos did a good job of acknowledging this dynamic without cramming it in our faces.

This books is full of useful survival knowledge like, “Breathe. Because the calm survive” and “Trust no one”. The common sense approach to survival in this book is something I enjoyed and the use of Dr. Doomsday’s rules of survival were very reminiscent of the movie Zombieland. I hate when dystopian or apocalypse novels use overly complicated or long winded explanations for survival. Keep it simple and you’ll survive.

I have one last bone to pick and it is with the character MacKenna and Jinx’s mother. MacKenna is so unlikable and has zero sense of survival. It feels like she’s just flopping around screwing things up for Jinx and almost killing one of the other protagonists. When she goes on her eventual redemption arc, it doesn’t feel like enough. Jinx’s mother is a whole different issue. Their mother seems to have no regard for her children’s lives. She abandons them to be with her detained husband and then tells Jinx,

“Don’t get caught by the police. They’ll want to hold you. Perhaps use you as leverage to force Jay to take a plea. Find your father,”

To me, it came off as if Jay was more important than both her children and Jay’s children. I don’t know a single responsible mother who would choose being unnecessarily detained over helping her children survive the collapse of society. It seemed silly and out of character for a mom who has been previously portrayed as both intelligent and caring.

Enough of my complaining.

This book is very well written and has an interesting plot to drive through the parts I didn’t enjoy. When you read Day Zero you will find yourself in every scene and you will catch yourself holding your breath during action sequences. I felt very engaged with what was happening inside the book. I was invested in what would happen next and whether Jay would be executed or exonerated.

This book is gritty and sometimes a little bit dense to read through but it is all worth it in the end. The plot and vivid scenery really make this book a winner. It’s fast-paced for the majority and will keep you asking questions. Who will win? ‘The Opposition’ or ‘The Spark’?

A huge thank you to Harlequin Trade Publishing and Inkyard Press for allowing me to take part in this book blog tour! I thoroughly enjoyed working with them and reading Day Zero. I give this book a 4/5 stars and look forward to what happens next.